Tim Boyle #8 of the Green Bay Packers runs with the ball in the first quarter against the Kansas City Chiefs.

How much new general manager Ryan Poles and head coach Matt Eberflus revamp the team’s roster remains to be seen, but previous GM Ryan Pace left them with several hefty contracts to consider, including that of backup quarterback Nick Foles, who is set to earn a base salary of $4 million. The Bears could save $3 million in cap space by releasing Foles, but considering they could use a veteran quarterback to back up second-year signal-caller Justin Fields, there’s also the possibility he sticks around.

ALL the latest Bears news straight to your inbox! Subscribe to the Heavy on Bears newsletter here! 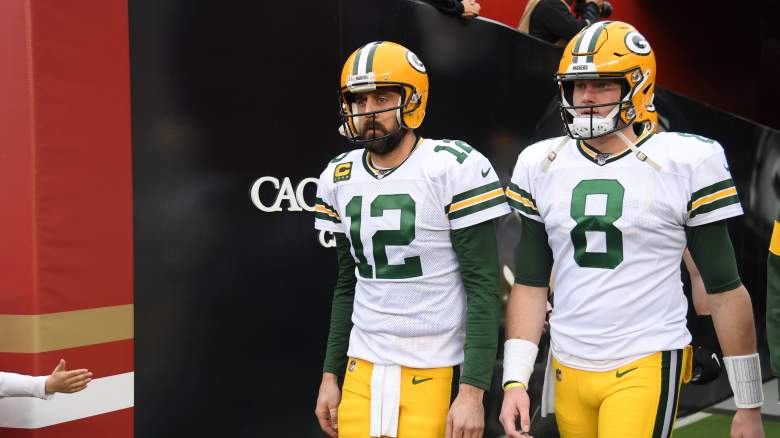 Insiders Adam Jahns and Kevin Fishbain of The Athletic put together a “free-agent shopping list” for the Bears, and a theme began to develop: it was peppered with former or newly-available Packers. When looking at the team’s QB situation behind Fields heading into the 2022 season, Fishbain noted there are two erstwhile NFC North free agent quarterbacks to keep an eye on for Chicago: former Minnesota Vikings backup Sean Mannion and former Packers backup Tim Boyle, who played behind Aaron Rodgers in 2019 and 2020.

“Two free-agent quarterbacks to note are Boyle, who was with Getsy and the Packers from 2019 to 2020, and Mannion, who played for the Vikings with Bears quarterbacks coach Andrew Janocko,” Fishbain wrote.

While Foles is clearly the better option to backup Fields, Chicago’s current coaching staff has no connection to the veteran quarterback, and Jahns made a solid point: Foles may want a fresh opportunity elsewhere. “Does Foles want to be here? I don’t think he does,” Jahns added.

The Bears will be looking to upgrade and add depth to multiple positions this offseason, with wide receiver and offensive line at the top of the list. Fishbain thinks Green Bay has free agents available that could help Chicago in both areas.

“Valdes-Scantling is another big-play wideout, having averaged 17.5 yards per catch in his career, and his connection to Getsy from their time together in Green Bay could make him a receiver to monitor,” Fishbain noted, adding another ex-Packer could also be an option to replace Sam Mustipher at center: “Lucas Patrick started 28 games the past two seasons with the Packers, so Getsy would have a good feel for his potential fit.”

Boyle spent his 2021 season backing up Jared Goff in Detroit, and he started three games, completing 61 of 94 passes for 526 yards, three touchdowns and six interceptions. He’s certainly not the best option out there, but as Jahns pointed out, much will depend on Foles.

Patrick is older (he’ll turn 29 in July, while Mustipher will be 26 in August), but this could come down to comfort level, and Getsy is far more familiar with Patrick. We’ll see what happens, but based on the market, Chicago’s needs and Getsy’s presence, don’t be surprised if several former Packers are wearing Bears jerseys in 2022.